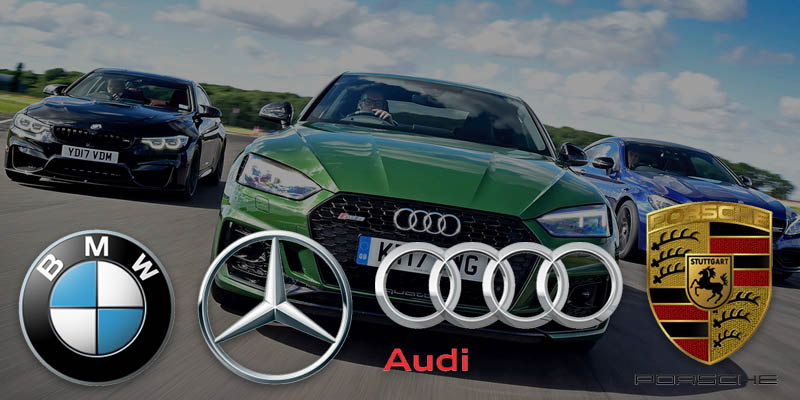 When you buy a new car, you are taking home much more than a body, 4 wheels and an engine, you are taking memories. Every brand carries a history, full of curiosities, ideals and unique concepts. Let us find out, now, what are the stories of 4 logos of the German car brands that enchant passionate about vehicles around the world.

In this way, you can check out the curiosities behind the Porsche, BMW, Audi and Mercedes-Benz logos. We will embark on a world of colors and formats that characterize each of these assemblers, assigning them a unique and easily identifiable profile.

The function of the brand identity is to represent the personality of the company that gives its name to the vehicles. Porsche was born in 1931 and its name comes from the family that started the production of these cars in Germany.

Since the beginning, the brand has been associated with technical perfection and elegant design, mainly because of its sports models. The company, founded by Ferdinand Porsche and his son Ferry Porsche, spent the first 4 years of its existence without a symbol to define it.

It was after the vehicles gained international fame and reached the United States, that Porsche finally started building a sign that represented it. The idea, however, did not come from one of the founders, but from a very astute American businessman. The man who kicked off the Porsche logo was Max Hoffman, a wealthy man in New York.

Max was known as the “business fox”, for his charm and ability to close successful partnerships. On a trip to Europe, he visited the Porsche family with whom he had previously negotiated, giving the young Ferry Porsche the idea of ​​creating a logo.

Legend has it, that this meeting took place over lunch, where Ferry responded to Max immediately with an idea. He took a napkin and a pen and created the first sketch of the Porsche coat of arms right there.

The initial idea included a shield from Wurttemberg, a horse from Stuttgart and the name of the founding family. Later, it was perfected by the company’s design team and, today, it is present in all vehicles of the automaker, with the same original ideas.

The Wurttemberg shield reveals the family’s strong connection with the Baden-Württemberg region in Germany. Where is the city of Stuttgart, home of Porsche. To represent the family’s roots, red and black stripes and the three deer horns were used, which refer to the symbol used on the original shield of the German state and the colors of the flag.

As for the horse, which goes to the center of the Porsche coat of arms, you must recognize it from another very famous brand. Yes, the Ferrari and Porsche horse is exactly the same. Both companies went looking for inspiration in the same place, precisely the city of Stuttgart.

In German, Stuttgart , comes from the word “Gestüt” , which means “arena” or “horse field”, and in Italian, “scuderia”. The latter that gave rise to the Ferrari logo. By placing the Stuttgart horse in the center of the coat of arms, the Porsche family wanted, once again, to refer to its place of origin.

The brand’s marketing department uses this story wisely. Coming to manufacture napkins with replicas of the original sketch of the Ferry coat of arms. However, this version is not interpreted as real by everyone. There is a second version, where the shield’s creator is not a man, but there are three.

The unofficial history of the Porsche coat of arms tells that the creators of the symbol were Franz Xaver Reimspiess, Lepper and Erwin Komenda.

Reimspiess was a head of Porsche Design Studios. Lepper was a Head of the company’s Advertising Department. And Erwin Komenda is a very important figure in the international motorsport scene, as he was responsible for the design of the Beetle body and several Porsche sports cars.

The parallel story tells that the coat of arms, with all the characteristics that we know, was the idea of ​​these three men and not an insight of the owner of the company. Whatever the official history, both carry a great deal of weight for the brand and gave rise to the coat of arms that still shines on the bodies of vehicles today.

Continuing our journey through the logos of the car brands, let’s talk about this automaker. BMW vehicles are widely known around the world. Its brand has gained great proportions and, today, it is an important manufacturer of international renown. Everyone knows BMW, but few stop to unravel what’s behind these 3 letters.

BMW is the German acronym for Bayerische Motoren Werke, which means Bavarian Engine Factory. At the beginning of the company, these engines that the name refers to were not cars, but planes.

BMW was born in the middle of the First World War in Germany. At that time, the company manufactured engines for fighter planes. After the end of the war, in 1919, the Treaty of Versailles prohibited the manufacture of these planes, forcing BMW to migrate from sector. Leaving planes aside, the factory started making motorcycles and, later, cars.

As well as a good narrative, BMW also presents two versions for the creation of its official logo. The first of these says that the blue and white colors found in the logo refer to the blue sky and the white fields and the shape is analogous to an airplane propeller. This version dates back to the beginning of the company as an aircraft engine manufacturer.

The second version says that the blue and white are a tribute to the Bavarian flag, the region where the original engine factory is located. This story is now considered official, but for a long time it had to be hidden. Due to the fact that, at the time of the founding of BMW, the use of national symbols in the designation or graphics of trademarks was illegal.

Continuing the journey through information about the logos of German car brands, we will understand where the 4 characteristic rings of Audi came from. This time, the story has only one version, widely known to the public that accompanies the international automobile market. Like the lines of the brand’s sophisticated vehicles, the Audi logo is presented in a simple yet refined way.

Its 4 rings refer to the merger of the companies that started the brand: Horch, Audi, Wanderer and DKW. These 4 companies were the oldest automakers in Germany and together they gave rise to Auto Union, a vehicle manufacturer based in the city of Ingolstadt. Auto Union is no more, but it was responsible for leveraging the production of premium vehicles and providing a solid foundation for what we now know as Audi.

The name of the current company, refers to a curious story. Before joining with the other 3 partners and founding Auto Union, one of the owners of the company Horch, whose name took the same name as his family, lost the right to use the name to his partner, who in a legal dispute was responsible for Horch company. Soon, he had to adapt and create another name for his new vehicle manufacturer.

Legend has it that the idea of ​​the word “Audi” came from the son of Horch, who at the time was studying Latin and had the brilliant idea of ​​translating the family name. “Horch” in German means “Hark” or “listen”. “Audi”, in Latin, is the singular imperative form for “audire”, which means “to hear”. And with this association, both the company Horch and the new Audi were able to join with the other partners to create Auto Union.

Finally, we ended this journey between the logos of the German car brands, talking about the history of Mercedes. If the automobile world exists as we know it, much of it is thanks to Mercedes-Benz. The founders of this company were responsible for important innovations, such as the construction of the first bus, the first truck with a gasoline engine and the first diesel truck in the world.

At this time of great inventions, however, the company still did not have that name. It was known as “Daimler-Mercedes”, referring to the name of one of the founders, Gottlieb Daimler. The other responsible for the company’s base is Carl Benz, who would join Daimler years later.

The symbol stamped on Mercedes products was created in 1909. It has a three-pointed star, which refers to the triplicity of the company’s activities. Daimler-Mercedes manufactured engines for automobiles, boats and airplanes.

According to the official website of the brand, the 3-pointed star was made official as a symbol of the company after Daimler’s death, he was the one who created it. The original drawing had been sent on a postcard to his wife with the following phrase: “One day that star will shine on my work.”

The central idea of ​​the emblem remains today, making an analogy to land, water and air. However, over the years, the symbol has undergone modifications until it reaches what we know today. The circle around the star was not added until 1923. Three years later, when the official merger of the Daimler and Benz company finally took place, a laurel wreath on the logo, inherited from Benz, emerged.

The history of car brand logos

Knowing the stories that generated the symbols of the great international automakers brings us closer to their essence. Just as a family crest tells the trajectory and roots of generations, the logos of car brands go back to the narrative and memory of how vehicles are developed over time.

Aston Martin revealed a sultry speedster inspired by 1950s race cars, the DBR22, ahead of its formal debut at Monterey Car Week. Though the two-seat roadster is a concept car,… [...]

The Infiniti Q60 is not long for this world. Car and Driver has learned from Infiniti that the 2022 model year will be the last for the handsome coupe. However,… [...]

2024 BMW 5-Series spy shots and video: Popular sedan slims down for next generation

A prototype for BMW's next-generation 5-Series has been spotted again. The new mid-size sedan is still at an early stage of development but a number of details can already be… [...]

Aston Martin on Monday revealed the DBR22, a sultry speedster set to make its formal debut on Aug. 19 at 2022 Monterey Car Week. The DBR22 is officially a concept… [...]

Volvo is set to unveil a successor to its popular XC90 later this year, and it appears the vehicle received an early reveal by way of patent drawings filed by… [...]